Brrrr…. looking  outside I see that it’s snowing – again! 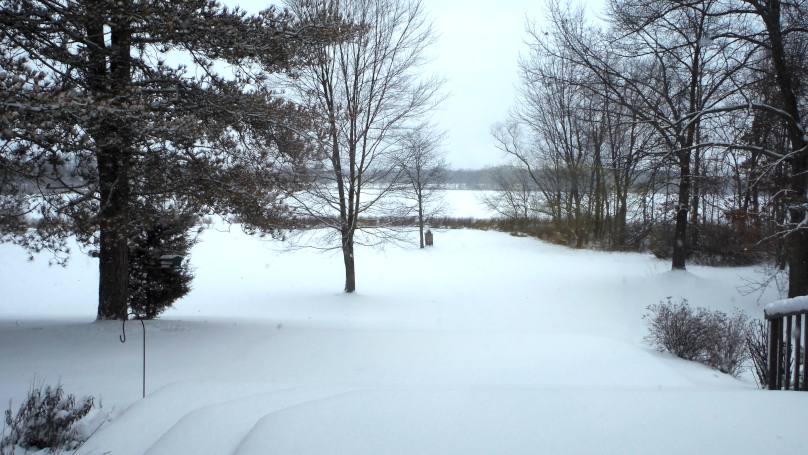 We’re past the half-way point – referred to as the cross-quarter day – Candlemas or ‘Ground Hog Day’. It didn’t actually happen on Ground Hog day – but it was close. Spring is coming.

We have a bird feeder out back and a suet holder that gets replenished more regularly than the one with just birdseed in it. The birds really must enjoy the high energy fat cake as they go through two blocks of it just about every 3 or 4 days here in Winter!

I’ve been enjoying watching the birds as they feed at our feeders. We get the regulars – Chickadees, Tuft Titmouse, Common Nuthatches, Downy and Hairy Woodpeckers, Blue Jays, Tree and Song Sparrow, Juncos, Male and Female Cardinals, the occasional Flicker, and for the first time since we moved here in 2007, two Red Headed Woodpeckers (RHW). The later has been a welcomed surprise!

I thought we only had one and, was confused as its head was rather brownish. I have learned that this is probably an immature bird. Weeks go by and I observed the RHW and thought that it must be filling in its feathers as its head seemed more red than before.  I was surprised to see one day, a RHW on the suet in back while the immature one was on the front suet blocks! We have two!

I once posed the question to an acquaintance – am I feeding the typical songbirds or the birds of prey by offering birdseed and suet? I have seen on more than one occasion where a Cooper’s or Short Shined hawk has swooped into the feeding area. Usually the songbirds vacate well in advance of such an attack. But sometimes I see feathers on top of the snow – a sign that  something more significant has transpired.

Why go on about birds? Well…..

This was elective though. A lesion in the tarsal dome of the left ankle. At least I think that’s what they called it – compounded with a ‘bunionette’ (little toe bunion). Now the lesion wasn’t a big deal. Arthroscopic surgery, two 1/4″ or so incisions, in the front of the ankle – BAM – done. But the bunionette – an entirely different animal! A rather long laceration along the base of the little toe down to, well – the bunionette. If I had not gotten the bunionette ectomy I think I’d be on my feet now – 5 weeks after surgery. But since I wanted to kill two birds with one stone (probably a bad idiom to use just after going  on and on about them and the hours of pleasure they give me now), I got both things addressed at the same time.

So now I am in a ‘Walking Cast’ that I am, under Doctor’s orders, NOT ALLOWED to walk on. Crutches or the walker (and occasionally the ‘peg-leg’) has been the modus operandi for the past 5 weeks and for the next 1 to 3  more. Time will tell just when I get to start to put ‘some’ weight on the left foot again.

As far as ‘Everything Isn’t Quite As It Seems’ – Winter snows blanket the region. However, the prospect of the next season is upon us. It may not be apparent right now but – Spring is right around the corner. Change is on the way. At least that’s what I’m looking forward to. While my cast is covering up a foot that is on the mend – the years to come of hiking up and down the mountains fishing in Northern PA is on the horizon. I’ve just got to get through the next few weeks – hopefully.

Winter is a time, if not for getting out and enjoying it (and you should), to prepare for the coming season. Whether it be an injury on the mend or tying some flies for the fly boxes – it’s time to get ready! Slate, Cedar and Pine Creek are getting ready – it just doesn’t seem like it.
UB