We’ve had a few arrivals here. I’m sure its happening everywhere – but I  reported last Winter that the first sighting of a Red Winged Blackbird was on February 27th. This year, I saw one or two on March 1st. Saw them almost every day since and tried to get a decent picture of them to no avail.

I’m not saying this is a great picture as I processed the ‘heck’ out of it but… its a fair representation of what has arrived.

Only a couple mind you – but the others will come soon enough. I believe then THEY will be the aggressors at the bird feeder once they get reinforcements – we’ll see. Right now the hierarchy stands at – 1 Red Headed Woodpecker, 2 Red Breasted Woodpecker, 3 Might be a tie between the Hairy Woodpeckers and the Blue Jays with the edge going to the Hairys,  then 4 possibly the Red Wnged Blackbirds.

About a week before the Red Winged Blackbirds showed up, the Sandhill Cranes arrived. 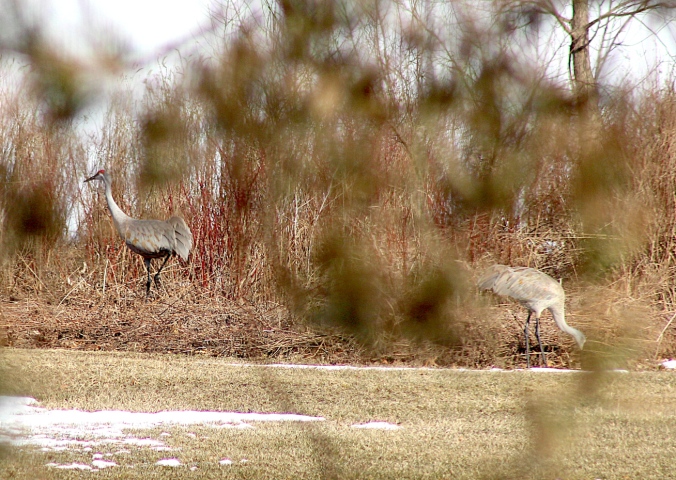 Apologies for shooting through  the pine tree. They were out at about  80 to 90 yards. I  wonder if this is the same pair that has been coming here for a few years a raising a clutch? I believe pairs reuse there previous geographic areas far as when they breed. Its been pleasant to see the young Sandhill Cranes mill about in the  back yard digging for dinner these past few years. They help keep the geese at bay (but I wish we had about 4 pairs take up camp here as the geese that come in just use numbers to over-run an area – my opinion).

The early arrivals seem to get me thinking of Spring at least. March is being typical ‘March’ – one day 50 to 60 degrees followed by a 20 to 30 degree one. But I believe Winter is waning. The sun’s rays are beaming stronger and the amount of daylight is increasing rapidly. Hopefully we will not get any more big ‘system’ style snow events – but we really don’t have any say in that matter. We’ll just deal with whatever we get wont we?

New Things to Check Out, Here in the SRS Website

2-20-2020:
The entire BLOG section has been revamped! Now you can hover over the BLOG tab and then drag down the individual BLOG title to read or comment on!